Rosemary (Rosmarinus officinalis) is a very aromatic evergreen shrub. Its leaves are intense green and its flowers are usually pale violet, but we will find them on occasion of intense blue, pink or white. 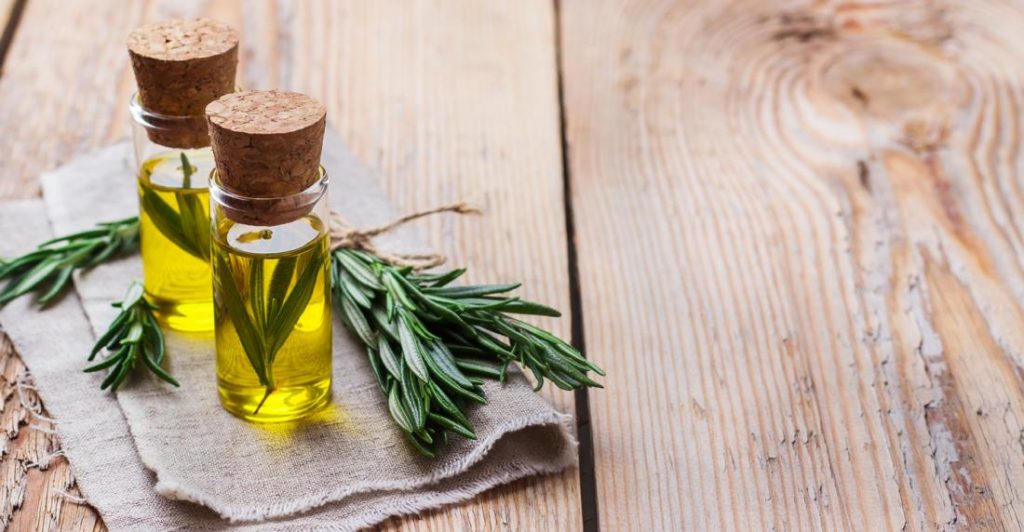 It grows in arid, rocky and calcareous places, and can flourish throughout the year if the climate is warm. The plant is native to the Mediterranean area, but is mostly found in southern Europe, north Africa and southwest Asia.

Rosemary was highly prized in ancient times. Its use as medicine was not frequent, but was mainly used in religious and purification rites (replacing incense), in public events or intimate celebrations. It was a symbol of love, fidelity, prosperity and immortality.

Rosemary essential oil is obtained from the flowering stems usually. According to the sources consulted, it could have been extracted for the first time in the twelfth century, probably by the Arabs. It is the main ingredient of the famous water of the Queen of Hungary, created around the year 1370. Legend has it that the queen received from an angel or a monk the formula of a rejuvenating liquor at the age of 72. It later became a perfume.

This essential oil should be taken into account to prepare simple and effective anti-aging treatments. Its anti-aging effect can not only be used in the care of the skin, but also in the care of joints and muscles and to promote memory.

Although it is also effective when it comes to treating respiratory pathologies, venous congestions and to take care of the liver.

ITS USE IN THE FORM OF A SERUM

In case of pain of contractures and joints we will dilute a couple of drops of the essential oil in a tablespoon of arnica oil that is in itself an excellent anti-inflammatory and we will apply it in the affected area.

In case of hair loss, we can add a few drops to our dose of shampoo by letting it rest for a few minutes before rinsing. It is also possible to add it to the content of the shampoo bottle in greater quantity.

It is also possible to add it to a black cumin oil * hair mask (for example) with which we can massage the scalp once a week.

Rosemary essential oil is also a good liver detoxifier that we can accompany in a cleansing detox diet. For example, adding 2 drops to a little black cumin vegetable oil that we will ingest twice a day for 15 days.

*Black cumin oil stands out for its anti-inflammatory, antioxidant, antifungal and antibacterial properties. Black cumin also has skin benefits and is recommended for the care of sensitive, allergic or itchy skin. 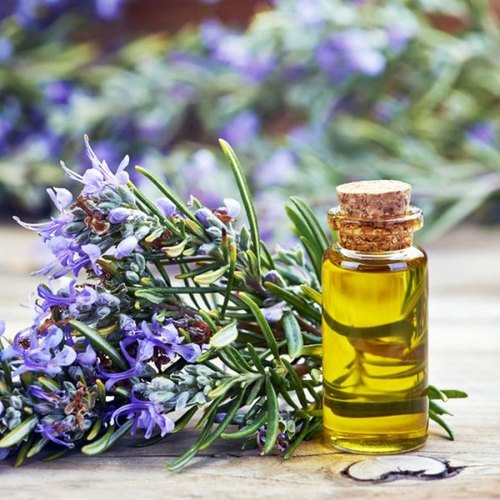 IN THE FORM OF ROSEMARY ALCOHOL to combat tired legs and arthritic pains:

Since it promotes blood circulation, it is of great help with tired and heavy legs, sore muscles and cellulite.

The grandmothers were rightly the main defenders of the benefits of scrubbing with rosemary alcohol. This type of scrubbing has been carried out since time immemorial. Rheumatic pains (arthritis and osteoarthritis) in the knees, shoulders or hands are usually very limiting. Scrubbing with alcohol in affected areas can help mitigate pain and improve mobility.

For this purpose, it is possible to make a preparation of rosemary alcohol:

HOW TO PREPARE ROSEMARY ALCOHOL FOR EXTERNAL USE

Rosemary macerated in alcohol is usually used to combat cellulite, to rub sore muscles and also to promote blood circulation in tired legs and /or those affected by varicose veins.

250 ml denatured* (SD alcohol) alcohol of 96º from pharmacy. (Also, perfumery alcohol, or 96º denatured ethyl alcohol like the one we use to make cosmetic grade tinctures).

50 grams of fresh rosemary leaves (it is important that the leaves are fresh to take full advantage of its active ingredients).

We put the rosemary leaves in the bottle and then we cover them with the alcohol.

We cover the bottle, place it in a dark place and let it macerate for 15 days.

After time, we pass the mixture through a filter or fine strainer to an opaque glass bottle.

We will keep it in a place away from any source of heat, as it is easily flammable.

Optionally, after the 15 days of maceration, we can add a couple of drops of rosemary EO to your alcohol to reinforce its effects.

*Denatured alcohol is ethanol (ethyl alcohol) made unfit for human consumption by adding one or more chemicals (denaturants) to it. Denaturing refers to removing a property from the alcohol (being able to drink it), not to chemically altering or decomposing it, so denatured alcohol contains ordinary ethyl alcohol. 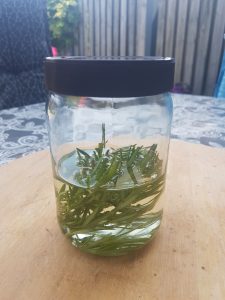 How is rosemary alcohol applied?

A small amount is taken, which fits in the hollow of the palm of the hand, and gently extends over the affected area. Then pass your hands, making frictions from bottom to top (i.e., from the feet up) so that heat is felt in the area. We can repeat the procedure three or four times a day or until we find relief.

This alcohol should not be used by people with psoriasis, dermatitis or eczema problems, because it could make these conditions worse. As we know, alcohol is not generally absorbed, but evaporates very quickly on contact with the skin. However, it tends to dry out the skin, so it’s best to be careful and not use it for other uses than those indicated. It should also not be used by pregnant or lactating women due to the tonic and stimulating properties of rosemary.

ROSEMARY FOR THE SKIN

For the skin it is possible to add it to an anti-aging serum formulation. One proposal would be to put 10 ml of rosemary essential oil in a base of 40 ml of jojoba oil, 20 ml of black cumin vegetable oil and 20 ml of argan vegetable oil to which we will add a few drops of vitamin E.

This combination of vegetable oils is highly emollient and firming. Together with the rosemary essential oil it becomes also a combination with antioxidant and anti-aging skin properties.

ROSEMARY AS A TONIC AND STIMULANT

Rosemary is a typically Mediterranean medicinal plant very energizing that awakens you and promotes concentration and physical and mental resistance to stressful situations, that is why it is defined as Mediterranean ginseng.

If you have difficulty concentrating or poor memory, it may be useful to use rosemary essential oil by olfactory route to optimize its diffusion at the brain level. If we have a diffuser or vaporizer, it is very easy to add about 10 to 15 drops to the container for diffusion.

ROSEMARY SYRUP to fight migraines, the first symptoms of flu and fever:

Instead of fighting headaches and flu with pills that have a long list of side effects (such as acetaminophen or ibuprofen), it’s a good idea to turn to natural herbal medicinal ingredients that help gently. The combination of rosemary, ginger and honey provide relief to many people. In addition, it is a pleasure to take them in the form of syrup both cold and hot.

To extract the healing powers of rosemary and ginger, a concentrated infusion is prepared, which is then mixed with honey and lemon to make a syrup. For this we will need:

1 piece of ginger about 4 cm long, the thickness of a thumb

The juice of a lemon

Remove the rosemary needles from the branches and chop them with a knife.

After peeling it, cut or grate the ginger into very thin slices.

Put the rosemary, ginger and water in a small saucepan, bring to a boil and let it rest for 10 minutes.

Strain through a thin mesh and let it warm.

Put the honey, lemon juice and concentrated infusion in a bottle with a screw cap and shake it until you get a uniform syrup.

Close the bottle tightly and hold it in the fridge. This syrup is preserved without problems for several weeks due to its high sugar content. 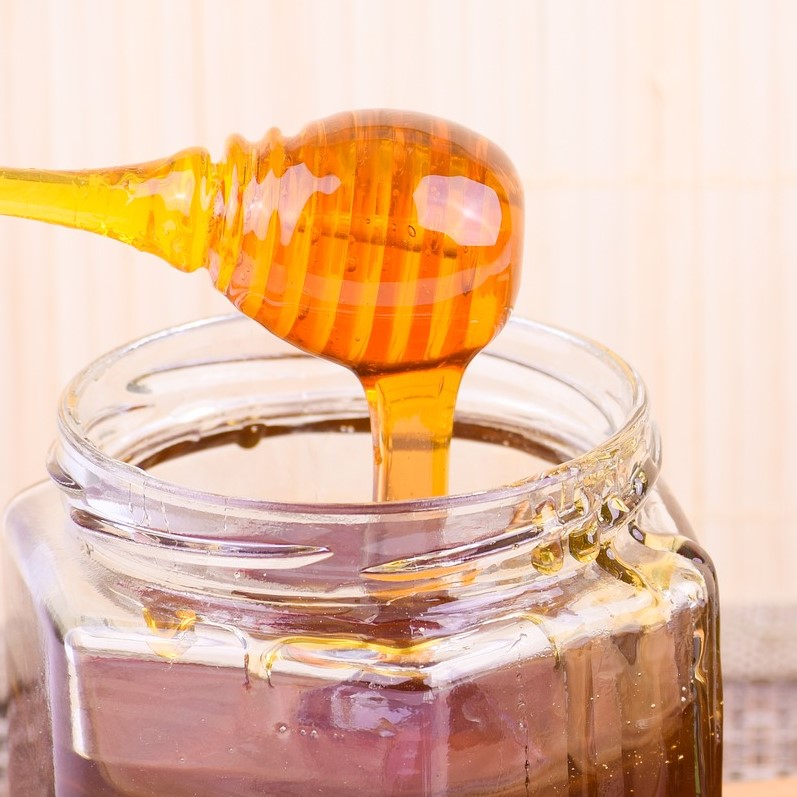 How to take rosemary syrup

Dilute three or four tablespoons of the concentrated syrup in a glass of cold water, in an infusion (a mint, for example) or in hot water to relieve headache and fever. To preserve the active ingredients of honey and lemon, it is advisable to let the tea cool to the consumption temperature before adding the syrup. If necessary, we can take several cups of infusion throughout the day.

In addition to its mitigating effect of headaches and fever, this spicy rosemary syrup has a delicious taste, so well-being is achieved on the one hand by its ingredients, and additionally through enjoyment.

Although no side effects have been demonstrated so far or with large amounts of rosemary, it is recommended not to take more than six grams a day. In particular, pregnant women are advised to consume only small amounts of rosemary.

The active ingredients of the syrup act against different types of headaches and the first symptoms of infections because:

Honey has anti-inflammatory, antibacterial and antispasmodic properties. It mainly helps against headaches associated with colds and fever.

Lemon contains vitamin C, which reduces sensitivity to pain and lowers fever and purifies the blood by eliminating toxins and viruses.

For these same reasons, it is possible to add a few twigs of rosemary to a hot bath if we are cold to help decongest ourselves and eventually lower the fever.

It is also possible to add the bath salts of rosemary and ginger that we elaborated in a previous post:

Let us also remember that rosemary must be stored in an airtight container away from direct light and in a cool place so that it retains its active ingredients. Fresh rosemary must be used quickly, however, the dry one is preserved much longer.